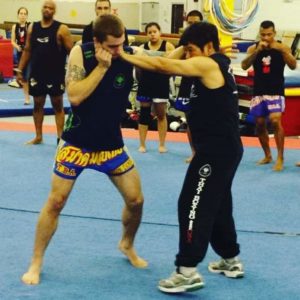 Cody is an associate instructor under Ajarn Chai Sirisute and the Thai Boxing Association. A former thai and MMA fighter, Cody holds an amateur kickboxing record of 5-0, and an amateur MMA record of 4-2. 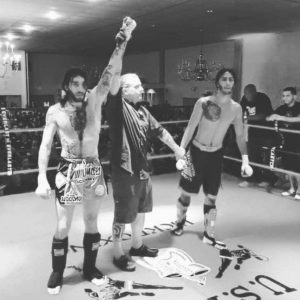 Join us in welcoming our second new Muay Thai Instructor, Mike Gill!. Mike began training in traditional Korean martial arts at the age of 10, and earned a 2nd degree black belt in Tang Soo Do which lead him to begin teaching.. After completing Rehab in May of 2013, Mike began training in Muay Thai as a way to help get his life back on track and quickly found his passion. He became an instructor at Tri State Martial Arts where he trained under fellow Witherspoon Boxing & Fitness coach, Cody Young, along with Jeff Jones and the TBA. Eventually he left Tri State to train at 8 Limbs Academy in West Philadelphia where he coached under Charlie Cottone and Kate Allen-Cottone.. As an amateur fighter, Mike earned a perfectly balanced record of 1-1-1 before welcoming his daughter into the world. With the birth of his daughter, Mike moved back to Bucks County to be closer to her..Mike recently completed his Master of Science in Clinical Mental Health Counseling.. WELCOME TO THE TEAM, MIKE! #muaythai #thaiboxing #newcoach #teamwork #witherspoonboxing #wsboxing

Tim"Terrible II" Witherspoon is a former professional fighter. I was raised in a family of boxers and was taught the value of hard work by my father, two-time heavyweight champion of the world Tim Witherspoon Sr.After spending 10 years as a professional fighter, I've retired and turned my passion for boxing into a career in personal training.As a resident of Bucks County and former Pennsbury student who grew up in Fairless Hills, my dream was to one day open a boxing gym in the area in order to not only give back to the community but to inspire a generation of future fighters and fitness fanatics, alike.I'm currently achieving that & more with the launch of Witherspoon Boxing + Fitness. Our facility will not only provide boxing training, but we also have a fitness/crossfit gym & yoga studio providing a wide array of classes by our phenomenal team of instructors.Our aim at Witherspoon boxing is to "BRING OUT EVERYONE'S INNER CHAMPION!"Our home sits below the iconic Grundy Clock Tower at the Historic Grundy Commons in Bristol Borough, PA, located on the corner of Canal & Jefferson Streets.